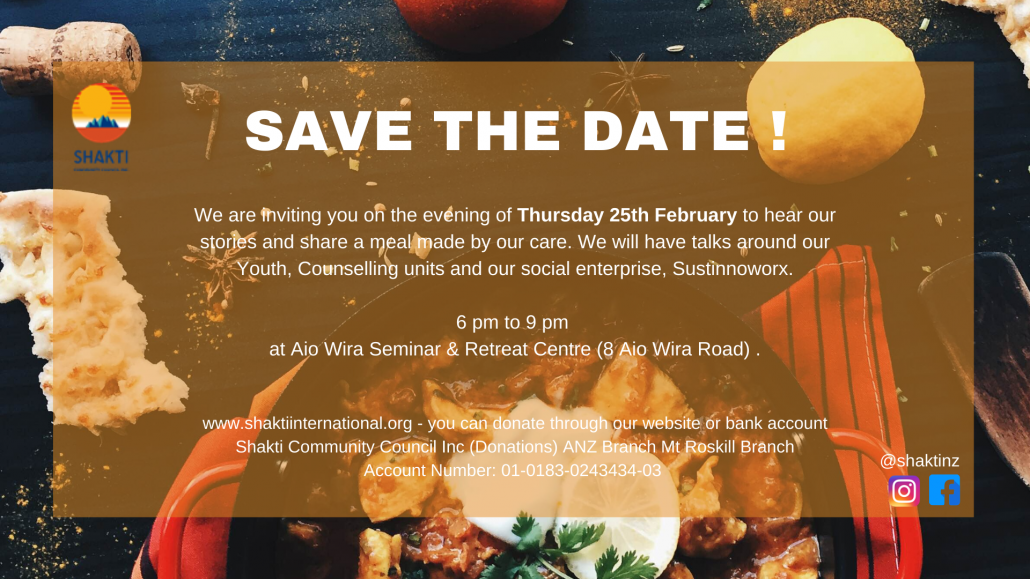 We are inviting you on the evening of Sunday 25th February to hear our stories and share a meal made by our care. We will have talks around our Youth, Counselling units, and our social enterprise, Sustinnoworx.
6 pm to 9 pm
in the Main Room at Aio Wira Seminar & Retreat Centre (8 Aio Wira Road).
Entry to the event will be at only $25 per person. To book your spot: https://www.eventbrite.co.nz/…/shakti-dinner-at-aio…
or more information funding@shakti.org.nz
! LIMITED NUMBER OF ENTRY !

In the wake of the recent Christchurch terror attacks which claimed 51 lives, international Trans-Tasman conference, Let’s Deal with it! brought together over 30 speakers from New Zealand and Australia, among politicians, human rights activists, community leaders, lawyers and media personalities, to discuss ways to achieve racial equity. 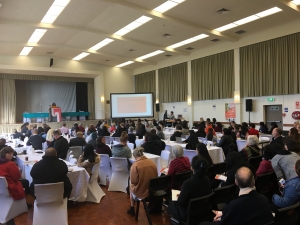 Shakti organised the one-day free conference with the aim of initiating conversations between New Zealand and Australia at all levels to approach issues that are threatening the fundamental rights of people of all ethnicities and the racial harmony within communities. 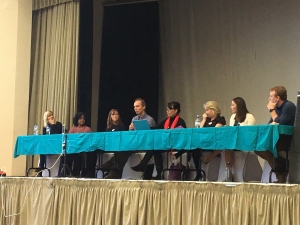 Panels gather specialists to discuss human rights, women’s leadership in promoting racial equity, extremism and radicalisation, the role of the media in promoting racial harmony and the need for a Trans-Tasman collaboration towards racial equity. Audience participation was also key to the discussion and it became clear to the organisers that the wider community is interested and willing to debate and want to have a proper space to share ideas around racial issues.

The organisation is producing a report compiling the panels’ discussions and the feedback from the audience, and is seeking a commitment from politicians to put racial issues at the top of their agendas. Shakti together with partner organisations is looking at developing an awareness and education campaign to support our growing multicultural society living safe in racial harmony.  “A Trans-Tasman Campaign is really important. We can reduce the gap of assumption, we can bring people together, and make sure people know their human rights and demand them”, comments Farida Sultana, Shakti’s founder and director. 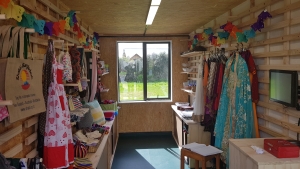 Sustinnoworx has opened its unique upcycling shop and workshop aimed at promoting sustainable living and reducing landfill in Ranui, West Auckland, on 6 September. Shakti Community Council, a not-for-profit which works with migrant communities, is the initiator of this innovative project.

The space was developed in collaboration with the Department of Corrections which was responsible for the conversion of two 40ft containers into the shop and workshop integrated spaces at the Paremoremo Prison. 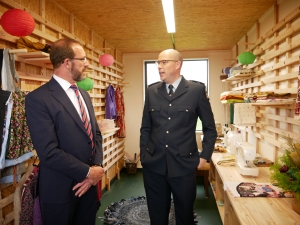 The projects has a multi-pronged approach targeted at women’s empowerment and sustainable development: To recycle and upcycle used and donated goods (much of which would otherwise be headed for the landfill) into upcycled goods; to provide life skills and entrepreneurial development pathways for vulnerable women in the community, including survivors of abuse and violence; to provide offenders an opportunity to contribute back to the communities and support their rehabilitation. 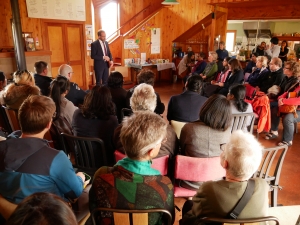 Sustinnoworx is the social enterprise wing of SETAC Limited (Shakti Education, Training and Advisory Company) which is a member organisation of Shakti Community Council Inc. It already has an op shop at 96A Railside Avenue, Henderson, where vulnerable women are trained in retail management and shop customer service. The new shop and workshop is located on Walk to Work land, part of Earthsong Eco-Neighbourhood.

The shop and workshop at Ranui have the support of various sponsors and funders, including Foundation North, Todd Foundation, Earthsong, Resene, Outdure, Architettura, Mitre 10, FreshChoice, Department of Corrections and Auckland City Council.

Sustinnoworx intends to expand this project to Christchurch and Tauranga, where Shakti provides services to women of migrant and refugee backgrounds.

Launch of WomensDoko – Voices of Women Displaced by War

Our Founder Farida Sultana and Senior Advisor and Counsellor, Shila Nair are currently in Europe filming a documentary capturing the true story behind women who are displaced by war.

We represent a New Zealand’s women’s organisation Shakti which has been working with migrant and refugee women and families for over 22 years. We plan to be in Europe between June 28 and July 26 to attend the CEDAW Conference being held in Geneva. We are taking this opportunity to also work on a documentary aimed at privileging the voices of women displaced by war and living in Europe. We seek an appointment with you during this period and also hope to meet women, particularly Syrian and Iraqi women, who have been displaced by war and have migrated to European nations for safety.

Please see below for more details of who we are and what we are seeking.

We are a group of women involved in the area of eliminating violence against women and children. Our interest in making this documentary is being inspired by the stories we hear of women displaced from their homes on account of war and their tales of survival through war and conflict

Aim & Purpose of the Documentary

In a time when it is impossible to consume news without encountering stories of war, there is nevertheless the sense that we are not seeing it in its full picture. Beyond the highly accessible images of destroyed cities and foreign faces covered in dust, blood, and fear, we are none the wiser about who the “victims” are, who they were before the conflict begun, and where they will be going from there.

This documentary is conceived with the purpose of shifting the story to the people affected, beyond statistics (of casualties, suffering and refugee quotas) and shock value images; looking at who they are, their subsequent journeys as asylum seekers, and subsequent settlement into host countries worldwide.

In particular this will be a montage of stories about Muslim women, who have had their suffering used, both as a way to justify international aggression and anti-war semantics, who, in all mainstream narratives, have their stories told, but are never asked to tell.

The interviewers will also be documenting their travels real time through a blog, including snippets of stories that will feature in the documentary. Another output from this project will be a book with in-depth details of the interviews with the women, with the added perspectives of the interviewers; allowing readers to learn more about their personal connections to the project and its wider purpose.

You can read our full oral submission which was made by Mengzhu here. 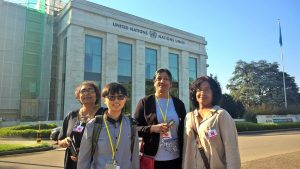 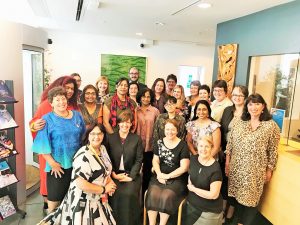 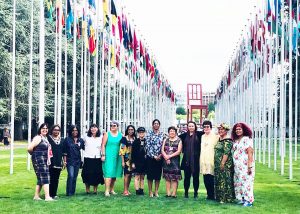 This year marks the 125th anniversary of woman’s suffrage in New Zealand. Make sure to check out the ‘Are We There? Women and Equality in Aotearoa’ Exhibition at Auckland Museum from 6th July. Shakti Founder Farida Sultana who has strived to represent the rights of migrant and refugee women in New Zealand for over 23 years, will be featured!